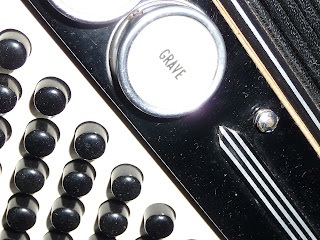 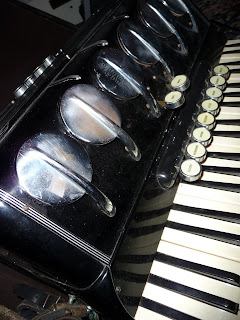 This blog is basically a huge “thank you” to our pal Gary Burrows (who punters may know from SA APRA and The Rustlers).

He already has a rep for being one of the nicest guys in the biz, with a heart the size of a 747.

And then he’ll go and do something like… give you a free accordion….!

Turns out he discovered someone was going to ‘throw away’ a perfectly good, full sized accordion because it belonged to their grandparents and they had no use for it.

So he arranged to take it off their hands.

Now, he could have tried to flog it on ebay and make a wad of cash. But, no. He knows that I play accordion in our band, so the first thing he thinks of is giving it to me.

It’s a beauty. Not only is it full size, which is what I normally play, but it’s black (big thumbs up, especially from Matt), with red bellows (more big thumbs up), and antique (probably) Brevetto Scandalli.

Plus it’s got a bass button sound called ‘Grave.’ You can’t get any more Brillig than that.

We are already scheming on what to write & play on it, and a ‘dueling’ accordion track has been suggested, just to be ridiculous. (Suggested by someone who doesn’t have to lug these things around to gigs already!). But if Matt or Denni put their hands up, who knows? But seriously, can’t wait to give it an official whirl on stage at some appropriate point.

Til then, it has found a happy new home, a kind sibling (my original pearl Americana), and a place in my heart.

Thanks Gary! You are a legend.